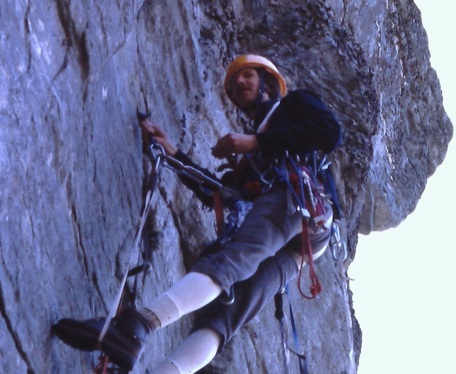 “Off belay” is a technical term from rock climbing.  When people are climbing, they use the protection of a harness and rope to connect them to a fellow climbing partner.  When you are attached to your partner you are “on belay” (as in the photo of Jamie above), so if you were to fall, you would only fall the length of the rope by which you are attached to your partner and the rock face.  Only when you have reached a safe and secure spot do you remove your connection to your partner’s rope.  Then you are “off belay.”

Jamie used the climbing metaphor to indicate that he was in a safe and secure location, at home in his power wheelchair with his family, where he could reflect on life and the many adventures he had experienced.  Then he dealt with a new challenge, and it was an adventure of sorts, testing his limits and his ability to confront changing circumstances, much as he dealt with such things in the outdoors while climbing or boating or skiing.

The last great adventure was confronting a disease that affected his body due to nothing more than random bad luck.  He had ALS – Amyotrophic Lateral Sclerosis, or Lou Gehrig’s disease as it is often called.  No one in his family ever had this disease;  just 5-10% of all patients have an inherited form of the disease.  It just happens that, for some people, the body’s motor neurons stop delivering signals that allow them to move muscles.  So Jamie lost the ability to walk, and then move his arms, and then his diaphragm got weaker too, making it harder to breathe.

He decided to write this book to share his experiences with others that also have enjoyed outdoor adventures and international travel, as well as those who have had to learn to live with purpose while coping with a disabling disease.